skip to main | skip to sidebar

It is an unseasonably warm night in January. The neighborhood snowmen are being assaulted by drops of heavy rain, and the valley lights are made brighter by the clarifying moisture. 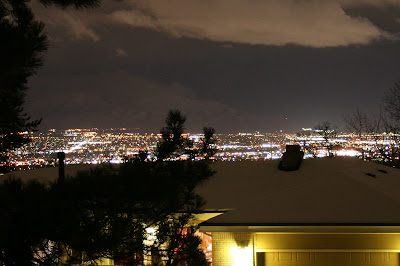 A handful of pretty ladies have gathered in Danielle's kitchen for a night of food. It's our first monthly dinner night, and Danielle is our gracious host. Two days ago, she revealed tonight's secret ingredient... Bacon! Salty, crispy, nutritious bacon. 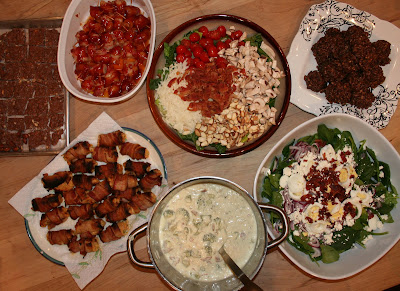 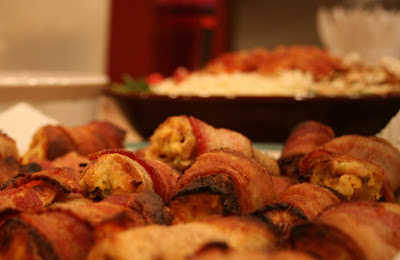 We each brought a dish containing the most delicious of all meats. 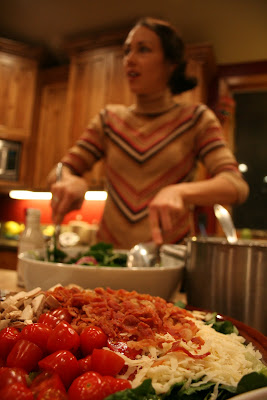 We came. We ate. We talked about boobs and illnesses and children and house demolition projects. And we were happy. 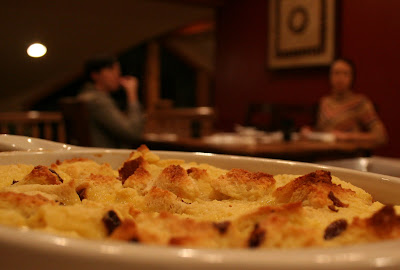 Things Boys (And Their Mamas) Think About

Out of the blue, while we were driving to Kindermusik, the punk's voice sounded from the back seat: "If I peed on my face... that would be funny!"
-~-
After giving the punk more than sufficient time to complete his business, I walked into the bathroom to hurry up the flushing, pulling up of the pants, and washing portion of the task. Of course, I entered to find him standing on the counter with the toilet unflushed, his underwear and pants on the ground. I asked, "Calvin, why don't you just put your underwear back on after you go to the bathroom? Why do you just stand here naked until I come find you?"
"Because I want to."
-~-
We are remodeling two of our three bathrooms. So when the toilet - the only working toilet in the house - started ominously filling instead of draining after the punk filled it with half a roll of toilet paper, I started pleading, "No, no, no, no... Crap, crap, crap, crap!"
Then of course, the punk asked, "What's a crap?"
Oh crap. 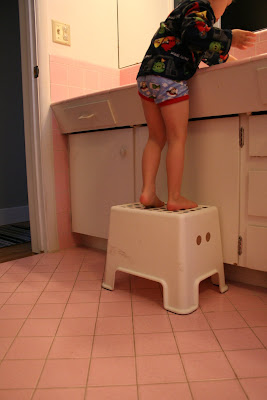 [This photo was taken a few days ago when the pink bathroom was still intact.]
Posted by Meili at 3:39 PM 2 comments: 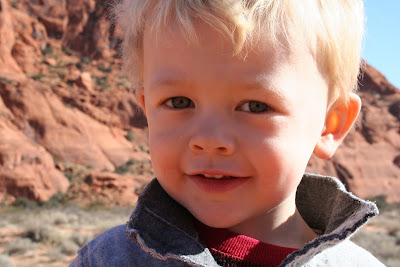 It seems that the punk is finished with his afternoon nap. He has decided that, as a mature boy with three long years behind him, he is above such things. For several days in a row, I have held my breath as I put him in bed and blow him a kiss, hoping that his eyelids will droop and his sweet head will stay glued to his blue, checkered pillow. But that blasted head has other ideas, and they don't include giving his mama a break.
You see, I am dedicated to the idea of "quiet time" when naps are a thing of the past. The problem is, I haven't yet figured out how to make this time work for us. It seems that as soon as I have tidied some things, brewed my hot cocoa, and sat my sore gluts under a blanket by the fire with some fiction in my hand (sigh), I hear the tell-tale squeak of the punk's bedroom door and little footsteps down the hall. When those footsteps lead to the bathroom, I'm a bit forgiving, although why his little digestive system insists on completing its job 20 minutes into "my" time, I'll never understand. At his call of, "Mom, I'm done!" I lend my assistance, then lead him back to bed. As soon as I put up my feet, he's out again, this time to give me something of his baby brother's that doesn't belong in his room. Every time he interrupts me, I feel that any previous quiet minutes are erased and I have to start over with cleansing breaths.
Today, I decided to lay some ground rules. I've been telling him that he needs to stay in his room until the clock says three-three-zero, but haven't given him incentive to do so. I looked into his big eyes and told him that if he comes out again, he'll have to sit in time-out for three minutes, then go back to his room. Two minutes later, footsteps. So without getting off my chair (I did a P90X core workout yesterday and everything hurts), I set my timer for 3 minutes and told him to sit down on the floor. He willingly plopped down in front of me, then pointed out that the floor is dirty and he should probably move to the seat in front of the fire. Little sneak. Throughout his entire time-out, he happily commented that his back was nice and warm. Not the punishment I had in mind. After his allotted time, I led him back to his room and this time, I had a better plan. If he comes out of his room again, he will have to lie down in bed.
Total silence for the next hour.
Until... "MOM! I'm stuck!"
I ran into his room to find him teetering on his bed, holding a puzzle upside down over his head, trying to prevent it from falling off the shelf. I grabbed it and helped him pick up the pieces. He smiled at me and said gratefully, "Thanks for saving me, Mom."
Total frustration and total bliss, all within 60 minutes. That's parenthood.
Posted by Meili at 2:46 PM 1 comment:

The Perils of Nordstrom

I walked into Nordstom on a resolute quest for boots. I'm looking for something with a heel (at my man's request), but not too tall. Something I can wear with one kid on my hip, one kid holding my hand, and a bottomless Mary Poppins carpet bag on my shoulder. And something with a little flare, i.e. a buckle or two, but not too over the top. No fur, no fringe. Just a sexy but functional mid-heel boot. So basically something that doesn't exist.
But then I spotted them. Mid-heel. Two buckles. Interesting greyish color. Nice height. I must try them on and purchase them and snuggle with them under a blanket by a romantic fire. So I picked up the display boot to check the price on the bottom, but alas. The sticker was missing. I asked the closest salesperson if he knew the price of my new best friends. Without skipping a beat, he replied, "They're three-hundred and ninety-five dollars."
I snorted and almost said, "Pshyeah right!" Then I noticed that he wasn't smiling. "Oh." I said. "Really?"
"Yes," he said. "They're [some uber-fancy brand that I've never heard of]." (Did I imagine his almost pitying look of distain?)
I turned and almost crawled back to the table to replace the boot on its pedestal to await its true owner. Goodbye, fickle friend.
Posted by Meili at 8:19 PM 3 comments:

Twelve of twelve in twenty-twelve!
January is a tough time to attempt taking great photos. Natural light... well... there just isn't any. Especially in my basement, which is where I spent a big chunk of my day. But looking back at my 2011 twelves, I love how the light (or lack thereof) changes with each month of the year. 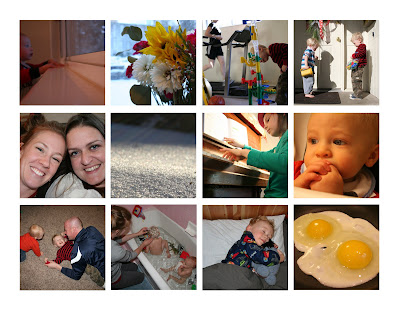 1. The punk waltzes into our room before the sun does, and the basher starts hollering soon thereafter. We all spend some quality time under the covers in mom & dad's bed before getting up to face the day. The basher likes to stand on my pillows and observe the goings-on in the frozen desert. 2. I like to have colorful flowers inside during the winter to offset the stark view outside. 3. My half marathon training has begun. Today, two miles of speed work and a trophy for Whitest Legs in America. 4. The punk took Play Doh and dried cranberries to his play date at Charlie's house. 5. Janeen and I took the basher out for a sushi lunch, then snuggled under blankets and talked all afternoon. I love her. 6. The punk and I tried to build a snowman yesterday with the crunchy, old snow in the backyard. Since my arms were occupied with the basher, who would not let me put his snowpants-clad bum down, and I am not adept at packing snow with my two other limbs, we soon abandoned our attempt. After last year's never-ending snowfall, this dry winter seems a bit lackluster. 7. Thursday is my big piano day with four students, but only three were able to come today. Here, Tess (Amy Gretchen's daughter) completes her theory page. 8. My man fed the boys while I taught. Meat and potatoes, of course! 9. Wrestle time! 10. Do you remember sucking on the washcloth in the tub when you were a kid? I do. 11. Usually I put the basher to bed and my man takes care of the punk. Tonight we switched. 12. My late dinner, with buttered whole wheat toast and rich hot cocoa.
Posted by Meili at 10:30 PM 5 comments:

Meili
My name is Chinese, but my hair is red. When I was young, the worst thing you could call me was a redhead. It was "golden," thank you very much. I am a full-time mama to the punk and the basher. I am a violinist with Strings of Elegance, a private piano teacher and math tutor, and an Assistant Director for The Gifted Music School. My violin and piano were both made in 1910, and I inherited both from different grandparents. I have an outie belly button. My man looks hot in his "old man" hats. I enjoy sushi, hot tubbing, and getting caught in the rain.

Stuff I Write About