skip to main | skip to sidebar

I can't decide if he looks guilty or just proud that he learned something new...? 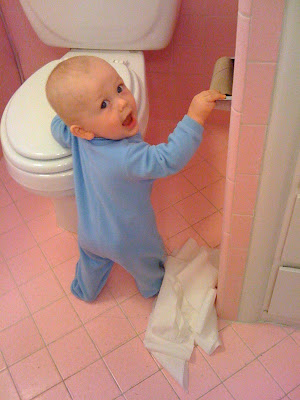 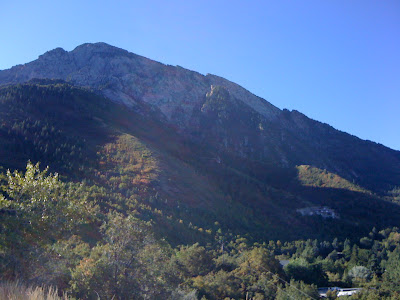 One of the major benefits of living in Olympus Cove is that we are 1.6 miles from the trailhead to Neff's Canyon. If I were really ambitious, I would stick the punk in the jogging stroller and we would just run there instead of driving, but "just running" there would mean running 1.6 miles up a mountain. No thanks. Instead, the punk and I drove to the trailhead and then got out for our morning workout. 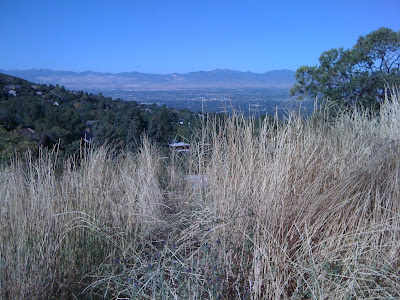 The air was crisp, the leaves are just beginning to change... almost. And the sun hadn't yet climbed over the mountain. All was quiet. I felt refreshed and rejuvenated.
Something tells me the punk felt differently. 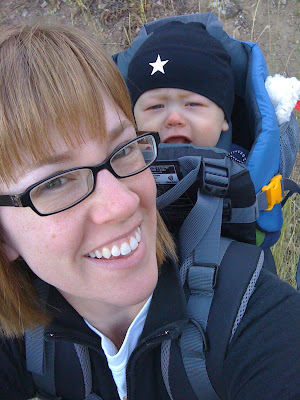 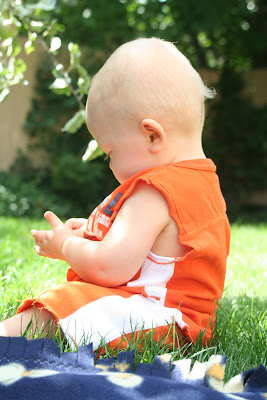 The punk is trying. He's trying real hard to grow hair, okay? He is embarrassed by his bald head, his pasty white skin, and don't even get him started on his elbow dimples. So, in an effort to someday look like his idol Fabio, he has mustered all the energy he could, and sprouted some hair. Unfortunately, it's all in one place on the back of his head.
We call it his duck tail. (Woo-ooo-ooo!)
Posted by Meili at 3:04 PM 5 comments:

The Punk and His Great Great Grandma

My Great Grandma Bell is sassy, quick, and funny. And she is 95 years older than my punk. I wanted to celebrate this happy and unusual circumstance by asking a professional photographer to capture our five generations. During the photo shoot at Trolley Square, strangers approached us to offer their congratulations and remark at how lucky we are to have each other. I agree! 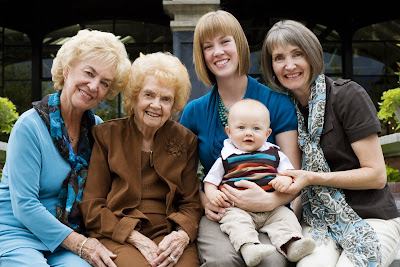 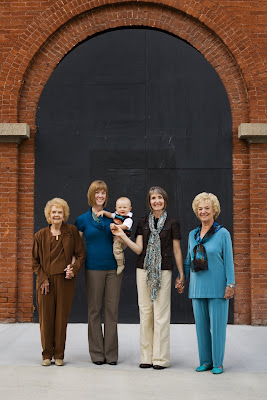 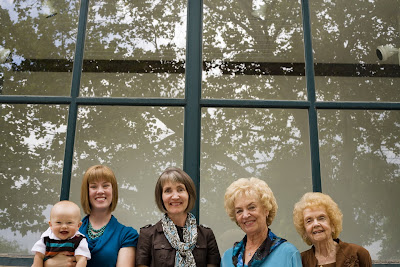 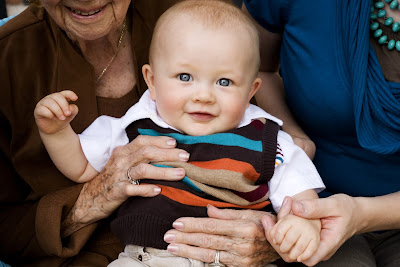 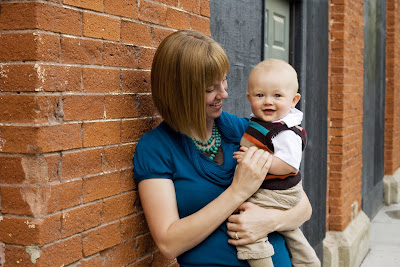 Jamie Lynn Christensen was our photographer. You can view her blog here. Isn't she great?
Posted by Meili at 1:40 PM 8 comments:

Will Run for Food

This morning, I was seriously lacking the motivation to go for a run. The two reasons that got me outside were my new running mix that I uploaded to my iPod last night after about 2 years of the same music, and this: 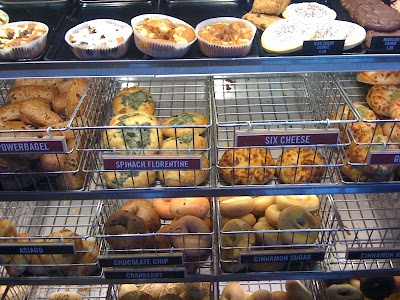 Free Bagel Friday at Einstein Bros! Is my workout void if I stopped here on the way for a chocolate chip bagel and cream cheese schmear?
After picking up my breakfast and heading home, I was rewarded with this: 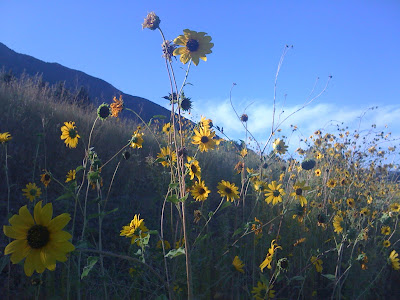 What motivates you to do the things that are hard? 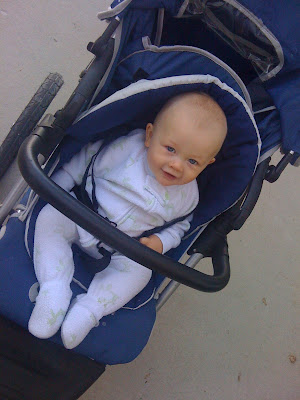 Where The Sidewalk Ends

The majority of my neighborhood lacks sidewalks; however, once in a while, one will appear out of nowhere, then disappear into some bushes. 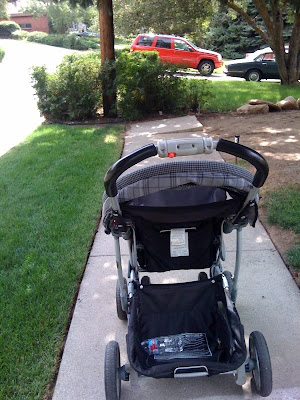 Saturday afternoon, I took the punk for a walk. He wasn't enjoying the outing as much as I had hoped he would, so we were on our way back home when (soon after taking this picture,) I heard a man moaning and groaning. I noticed that the older gentleman who had been sitting on his front porch when we passed him going north was no longer there. It puzzled and alarmed me a bit, but I was more curious than afraid. I left the punk in his stroller on the driveway and ventured down the side of the house towards the moaning.
Narrow cement steps descended from the front yard to the back yard, and lying across them were some tree branches. A man ("Mr. X") was stumbling down the last two steps and he had obviously had some kind of accident. His shirt sleeve was torn, and he was bleeding from his elbow and his head. I said, "Sir? Excuse me, Sir, are you hurt?" All the while, he was still moaning, more from shock, I think, than anything else. I asked him if he would like me to call 911, but he refused. Besides being scraped up and a little frightened and winded, he seemed okay. So, after retrieving the punk from his stroller, I met Mr. X inside his house where he attempted to get a hold of his wife while I got him a glass of water. Now that I think about it, it was odd that I was in a stranger's home rummaging around his kitchen trying to find the glasses (which were in the last cupboard I opened, because that's always how those things go), but at the time, it was the most natural thing in the world. A nice gentleman needed my assistance and I was there at the right time. It turns out, he was trying to carry branches up the cement steps to the garbage can, but somehow lost his footing and tumbled down the unforgiving terrain.
I called my man and asked him to come over to help me make sure Mr. X was alright. On his way over, he brought the neighbors who live across the street from the man. These are the same neighbors who helped me when I locked myself out of the house the week before. They are busy people, rescuing everyone around them from crises.
The next day, Mr. X's wife, Mrs. X, retold the story over the pulpit in testimony meeting. Because I was in the mother's lounge with the punk, I only heard bits and pieces, but was commended later for coming to Mr. X's rescue. Apparently, a story becomes better and better the more it is told because today, when a friend in the neighborhood learned that it was me who had "found Mr. X," she was greatly impressed. She had heard that he was lying on the ground when I came to his aid. I'm hoping that as the story circulates, I'll eventually be the girl who, upon finding poor Mr. X at the bottom of a ravine in a pool of his blood, which was pulsating from his severed arm, made a tourniquet from my bra and reattached his limb using my MacGyver skills and grass woven from his overgrown lawn.
Posted by Meili at 9:46 PM 9 comments:

Meili
My name is Chinese, but my hair is red. When I was young, the worst thing you could call me was a redhead. It was "golden," thank you very much. I am a full-time mama to the punk and the basher. I am a violinist with Strings of Elegance, a private piano teacher and math tutor, and an Assistant Director for The Gifted Music School. My violin and piano were both made in 1910, and I inherited both from different grandparents. I have an outie belly button. My man looks hot in his "old man" hats. I enjoy sushi, hot tubbing, and getting caught in the rain.

Stuff I Write About